It is slow to spread from vineyard to vineyard, but once a vineyard is infested, the infestation is difficult to clean up. 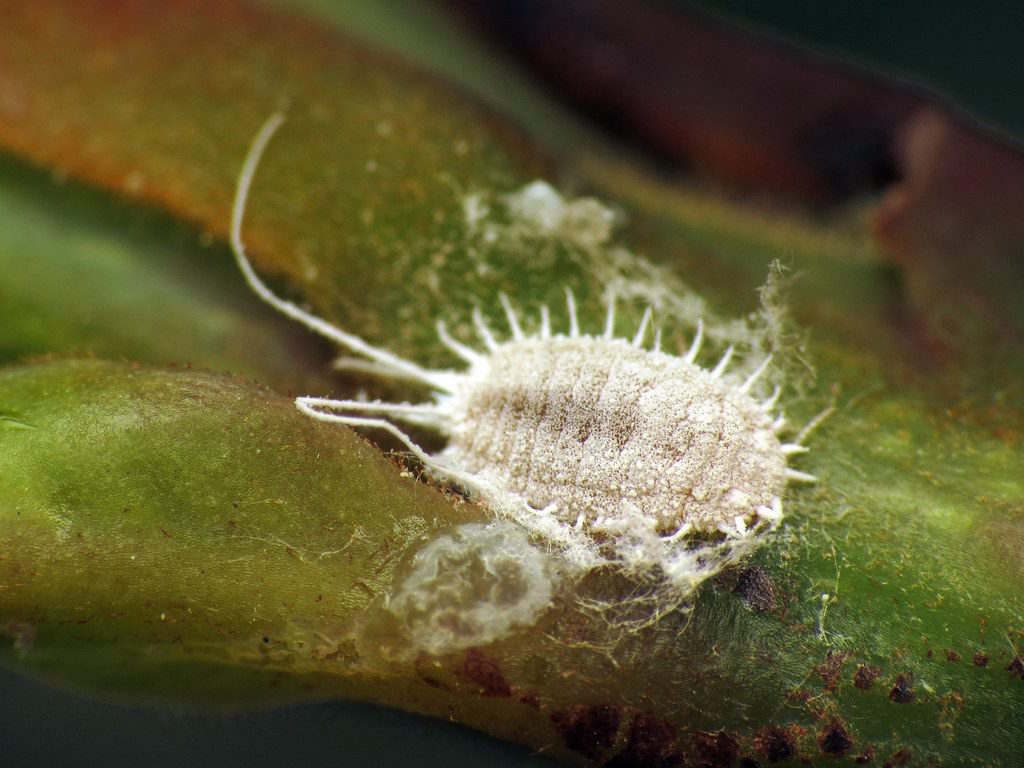 Grapevine mealy bug attacks many plant species including all tree fruits as well as other rosaceous plants, grapevines, ornamental trees and shrubs. This insect is able to develop new host strains, which allows it to adapt to more hosts. Adaptations may include different development rates and numbers of generations per year.

The egg is a salmon coloured, elongated oval. Eggs are laid in masses of waxy filaments that have a cottony appearance.

The 1st instar nymph, or crawler, is pink to salmon coloured and has well developed legs. The crawler is covered with a light coating of waxy granules, giving it the appearance of being coated with flour. After settling to feed, the crawler moults into a sedentary nymph, and the coating of wax becomes heavier.

The adult female is wingless and looks similar to a nymph. It can be up to 5 mm long. It has a well developed ring of waxy filaments around the sides of its body. 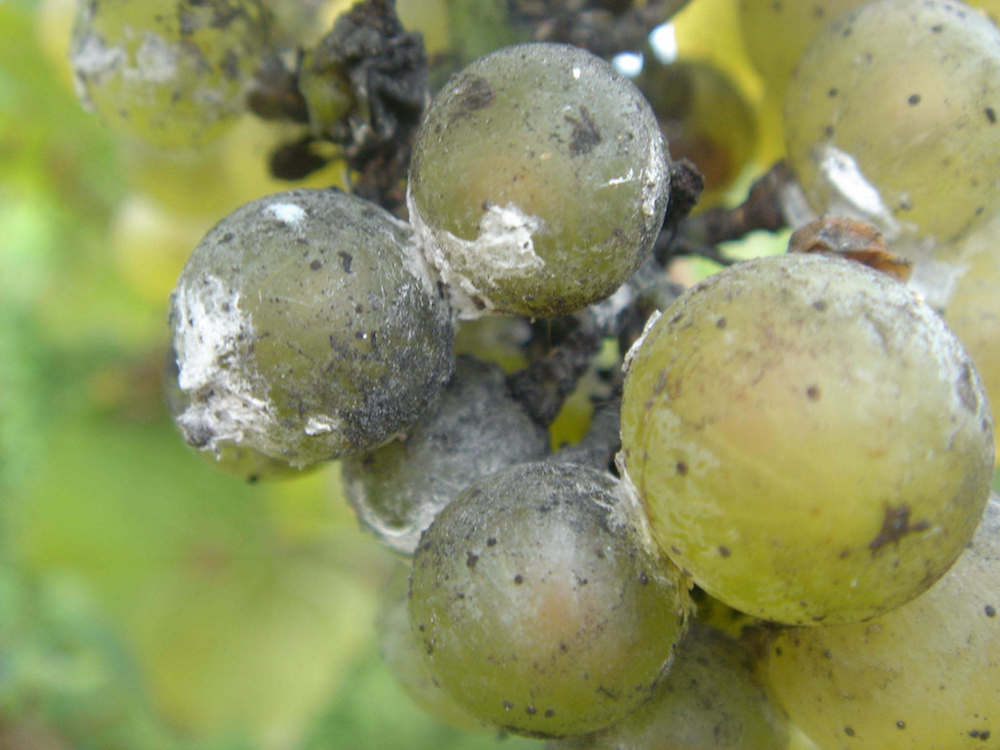 Filaments are longest at the posterior end of the body and become progressively shorter towards the front of the body.

The adult male is much smaller than the female and has wings held flat over the back. It is a fragile insect and resembles a male scale.

Grape mealy bug overwinter as eggs or crawlers within the loose cottony egg sac under bark scales on scaffold limbs, in other sheltered places on trees, or in litter at the bases of grapevines.
Crawlers start emerging at the beginning of bud swell and begin feeding on the bases of buds. When buds open they go directly to new shoots and leaves. Crawler movement occurs over a long time, ending at about petal fall. 1stgeneration nymphs mature during late Dec/Jan. Mated females migrate to sheltered areas, lay eggs and die in the egg sac. A partial 2nd generation matures in late Feb/March.

The most obvious damage by grapevine mealy bug results from the honeydew it secretes. Honeydew is cast off in small drops and falls down through the canopy. When it lands on fruit it causes a coarse, black russet. Sooty mould grows in the honeydew. This fungus taints the flavour of the resulting grape juice.

Check during the dormant season for eggs and crawlers in egg sacs under bark scales. The white cottony mass makes egg sacs easy to see. During delayed-dormant and cluster bud stages, crawlers can be monitored by examining developing buds on spurs. It is easy to detect infestations in late Dec/Jan when mature females are crawling back to larger spurs to deposit eggs or during harvest when damaged grapes are evident in bins.

Many generalist predators, such as lacewings, ladybird beetles and predaceous bugs, will feed on mealy bug. Often the predator numbers don’t control mealy bug well enough. (1)
After initializing and establishing ‘Homeopathic Plant & Soil’ initiative in January 2020 in Nelson and Upper Moutere, a trial series was set up in Upper Moutere, Gisborne and Western Australia/Windance Wines in vineyards of HP&S members. A program had been established by EcoGrape/Sustain-Ability Ltd during the last three years and was ready to be put in motion. Based on actual symptoms of mealy bug and their damage caused, a strategy could be developed.

With the help of clinical, epidemiological and laboratory data, reasonable conclusions could be gathered about the group of homeopathic medicines that would work in this vine infection. An in-depth analysis of the recorded symptom-set of affected grapevines was done with the use of the principles of the Homeopathic Organon according to Dr Samuel Hahnemann and the tools of Repertory and Materia Medica (2) to find the adequate remedies in a scientific manner.

Comparing Keynotes of various optional medicines and comparing them with the help of the so called ‘Polarity Analysis Method’ of Dr Heiner Frei, CH (3), the remedy was composed of a potentised plant ingredient that keeps away ants which are usually milked by the mealy bug which eat their sugary secretion, and another one which directly keeps away the mealy bug. Two organic vineyards in Gisborne and WA applied two selected 30C potencies this late summer and were really pleased with the result:
”usually my vines would be black right now, after applying the homeopathic remedy together with the biodynamic Silica 501 preparation, there was a significant decrease in mealy bug numbers in the grapevines in early March” the Gisborne grower says. The remedy is 30C potency and as such trans-molecular, fine matter energy only based. It is BioGro NZ certified, harmless to beneficial insects, growers, soil, water and plants. It has a zero carbon footprint and has been researched and tested by EcoGrape/Sustain-Ability Ltd, Nelson.